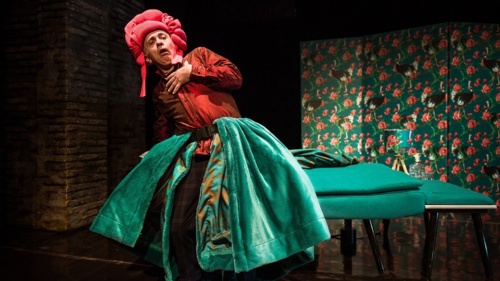 This hilarious, subtle, profound monologue is so full of characters that it seems like a comedy. The peculiarity is that all these characters are played by a single actor, in a sort of transformist whirlwind of word and voice.
"All his mother" is a text in which one can laugh a lot, make the necessary reflections on family conditioning and understand how any (re)birth, is providential, desirable or even necessary, even when it is a coming-out in reverse, just like that of Guillaume, the protagonist of the story. Because 'All His Mother' is the story of a boy who, through vicissitudes and adventures, tries to assert his heterosexuality in a family that had already largely categorised him as homosexual.
Guillaume is not like his handsome and testosteronic brothers, he is the exact opposite.
Disliked by his father and brothers, he finds himself imitating and bringing to life all the women he has imagined or known, gradually becoming Princess Sissi, Archduchess Sophie, a perfect Andalusian dancer, his grandmother, his aunt. In short, every woman he observes or admires.  But more than anything else, he finds himself pleasing and idolising his mother, whom he tries to imitate in every nuance, every feature, another reason why the family considers him effeminate. But the story will take a bizarre and unpredictable turn...