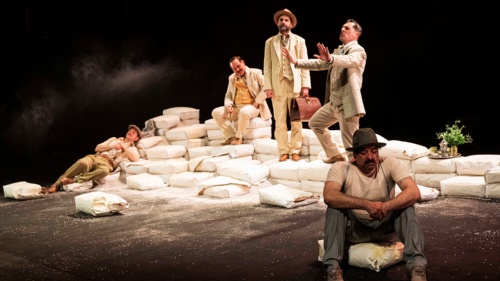 The city of Oran in Algeria is struck by an inexorable and terrible epidemic. Isolated, starving, unable to stop the pestilence, the city becomes the stage for the passions of a humanity on the borderline between disintegration and solidarity. Religious faith, the hedonism of those who neither believe in abstractions nor are capable of 'being happy alone', the simple feeling of one's duty are the protagonists of the story; indifference, panic, bureaucratic spirit and petty selfishness the allies of the plague. Albert Camus' is a novel that plumbs the depths of the human soul and does so by choosing an extreme moment, one of absolute emergency, of upheaval of the ordinary. "Camus' humanity is funny, surprising, moving and exciting: the French author looks at us without ever judging us, with ever new eyes. And he offers us a possible direction, a sense in the chaos, a brake on fear'. It is from these considerations that director Serena Sinigaglia moves to create a stage version of the text, interpreted by Marco Brinzi, Alvise Camozzi, Emanuele Turetta, Oscar De Summa and Mattia Fabris.